About the Pulsar Flink Connector

In order for companies to access real-time data insights, they need unified batch and streaming capabilities. Apache Flink unifies batch and stream processing into one single computing engine with “streams” as the unified data representation. Although developers have done extensive work at the computing and API layers, very little work has been done at the data messaging and storage layers. In reality, data is segregated into data silos, created by various storage and messaging technologies. As a result, there is still no single source-of-truth and the overall operation for the developer teams poses significant challenges. To address such operational challenges, we need to store data in streams. Apache Pulsar (together with Apache BookKeeper) perfectly meets the criteria: data is stored as one copy (source-of-truth) and can be accessed in streams (via pub-sub interfaces) and segments (for batch processing). When Flink and Pulsar come together, the two open source technologies create a unified data architecture for real-time, data-driven businesses.

To improve the user experience and make the Pulsar Flink connector easier-to-use, we built the capabilities to fully support the Flink data format, so users of the connector do not spend time on manual tuning and configuration.

The Pulsar Flink Connector 2.7.0 supports features in Apache Pulsar 2.7.0 and Apache Flink 1.12 and is fully compatible with the Flink connector and Flink message format. With the latest version, you can use important features in Flink, such as exactly-once sink, upsert Pulsar mechanism, Data Definition Language (DDL) computed columns, watermarks, and metadata. You can also leverage the Key-Shared subscription in Pulsar, and conduct serialization and deserialization without much configuration. Additionally, you can easily customize the configuration based on your business requirements.

Below, we provide more details about the key features in the Pulsar Flink Connector 2.7.0.

When users needed to strictly guarantee the ordering of messages, only one consumer was allowed to consume them. This had a severe impact on throughput. To address this, we designed a Key_Shared subscription model in Pulsar that guarantees the ordering of messages and improves throughput by adding a Key to each message and routes messages with the same Key Hash to one consumer.

Pulsar Flink Connector 2.7.0 supports the Key_Shared subscription model. You can enable this feature by setting enable-key-hash-range to true. The Key Hash range processed by each consumer is decided by the parallelism of tasks.

In previous versions, sink operators only supported at-least-once semantics, which could not fully meet requirements for end-to-end consistency. To deduplicate messages, users had to do some dirty work, which was not user-friendly.

Transactions are supported in Pulsar 2.7.0, which greatly improves the fault tolerance capability of the Flink sink. In the Pulsar Flink Connector 2.7.0, we designed exactly-once semantics for sink operators based on Pulsar transactions. Flink uses the two-phase commit protocol to implement TwoPhaseCommitSinkFunction. The main life cycle methods are beginTransaction(), preCommit(), commit(), abort(), recoverAndCommit(), recoverAndAbort().

You can flexibly select semantics when creating a sink operator while the internal logic changes are transparent. Pulsar transactions are similar to the two-phase commit protocol in Flink, which greatly improves the reliability of the Connector Sink.

It’s easy to implement beginTransaction and preCommit. You only need to start a Pulsar transaction and persist the TID of the transaction after the checkpoint. In the preCommit phase, you need to ensure that all messages are flushed to Pulsar, while any pre-committed messages will be committed eventually.

Users in the Flink community expressed their needs for the upsert Pulsar. After looking through mailing lists and issues, we’ve summarized the following three reasons.

Based on the requirements, we add support for Upsert Pulsar. The upsert-pulsar connector allows for reading data from and writing data to Pulsar topics in the upsert fashion.

This feature unifies the source of the batch stream and optimizes the mechanism for task discovery and data reading. It is also the cornerstone of our implementation of Pulsar batch and streaming unification. The new Table API supports DDL computed columns, watermarks and metadata.

Support SQL read and write metadata as described in FLIP-107

FLIP-107 enables users to access connector metadata as a metadata column in table definitions. In real-time computing, users normally need additional information, such as eventTime, or customized fields. The Pulsar Flink connector supports SQL read and write metadata, so it is flexible and easy for users to manage metadata of Pulsar messages in the Pulsar Flink Connector 2.7.0. For details on the configuration, refer to Pulsar Message metadata manipulation.

If you’re using the previous Pulsar Flink Connector version, you need to adjust your SQL and API parameters accordingly. Below we provide details on each.

From an API perspective, we adjusted some classes and enabled easier customization.

Pulsar offers a hierarchical architecture where data is divided into streaming, batch, and cold data, which enables Pulsar to provide infinite capacity. This makes Pulsar an ideal solution for unified batch and streaming. 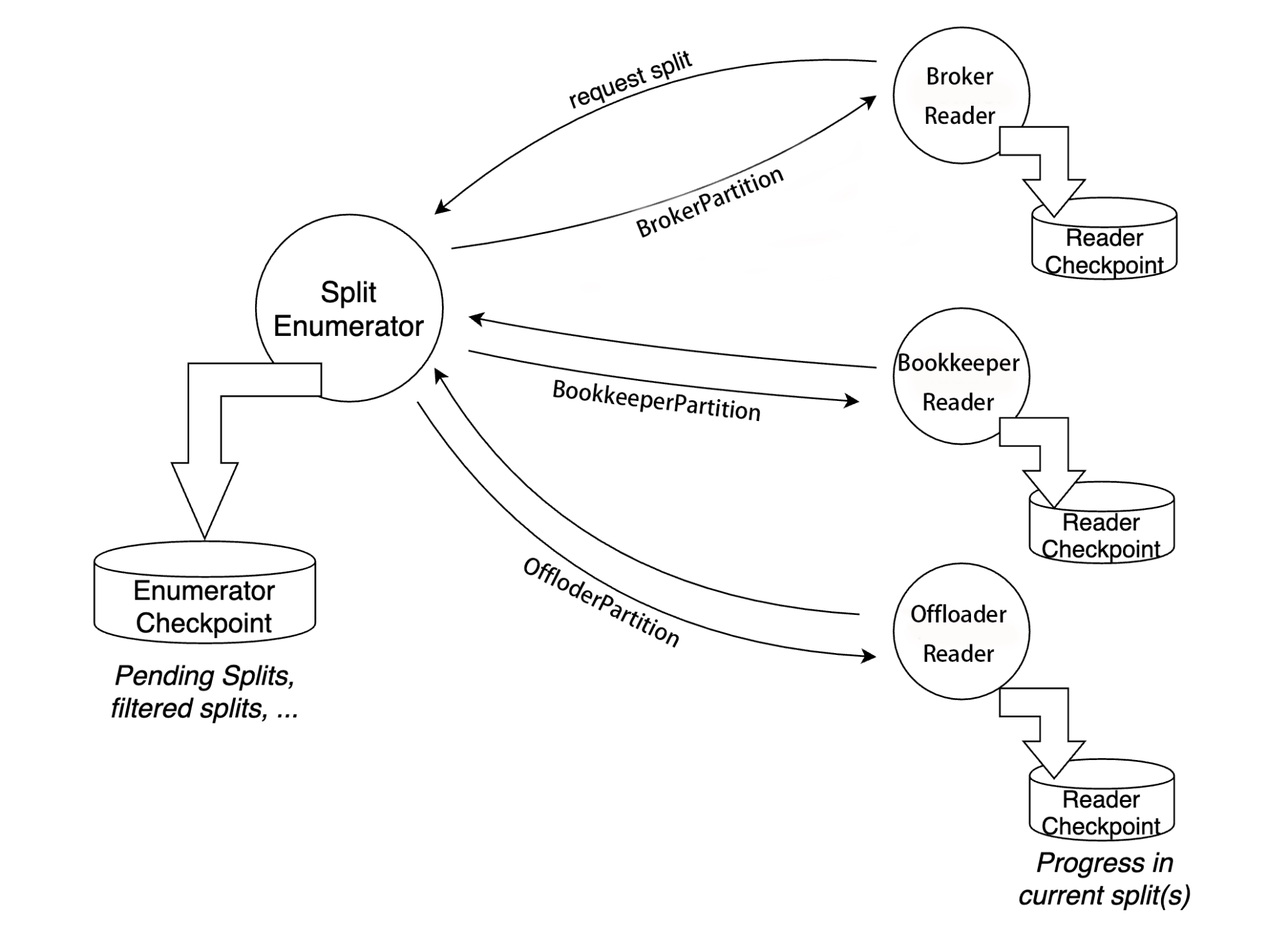 Apache Pulsar stores messages in the ledger block for users to locate the ledgers through Pulsar admin, and then provide broker partition, BookKeeper partition, Offloader partition, and other information through different partitioning policies. For more details, you can refer here.