Figuring out how to manage and model temporal data for effective point-in-time analysis was a longstanding battle, dating as far back as the early 80’s, that culminated with the introduction of temporal tables in the SQL standard in 2011. Up to that point, users were doomed to implement this as part of the application logic, often hurting the length of the development lifecycle as well as the maintainability of the code. And, although there isn’t a single, commonly accepted definition of temporal data, the challenge it represents is one and the same: how do we validate or enrich data against dynamically changing, historical datasets? 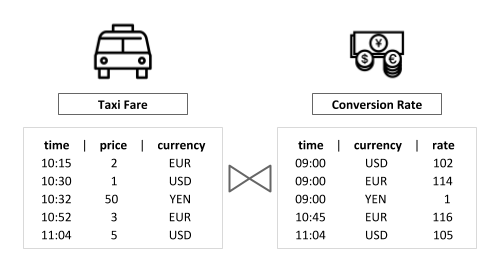 For example: given a stream with Taxi Fare events tied to the local currency of the ride location, we might want to convert the fare price to a common currency for further processing. As conversion rates excel at fluctuating over time, each Taxi Fare event would need to be matched to the rate that was valid at the time the event occurred in order to produce a reliable result.

In the 1.7 release, Flink has introduced the concept of temporal tables into its streaming SQL and Table API: parameterized views on append-only tables — or, any table that only allows records to be inserted, never updated or deleted — that are interpreted as a changelog and keep data closely tied to time context, so that it can be interpreted as valid only within a specific period of time. Transforming a stream into a temporal table requires:

Going back to our example use case, a temporal table is just what we need to model the conversion rate data such as to make it useful for point-in-time querying. Temporal table functions are implemented as an extension of Flink’s generic table function class and can be defined in the same straightforward way to be used with the Table API or SQL parser.

What does this Rates function do, in practice? Imagine we would like to check what the conversion rates looked like at a given time — say, 11:00. We could simply do something like:

Temporal tables reach their full potential when used in combination — erm, joined — with streaming data, for instance to power applications that must continuously whitelist against a reference dataset that changes over time for auditing or regulatory compliance. While efficient joins have long been an enduring challenge for query processors due to computational cost and resource consumption, joins over streaming data carry some additional challenges:

In the particular case of temporal data, time-windowed joins are not enough (well, at least not without getting into some expensive tweaking): sooner or later, each reference record will fall outside of the window and be wiped from state, no longer being considered for future join results. To address this limitation, Flink has introduced support for temporal table joins to cover time-varying relations. 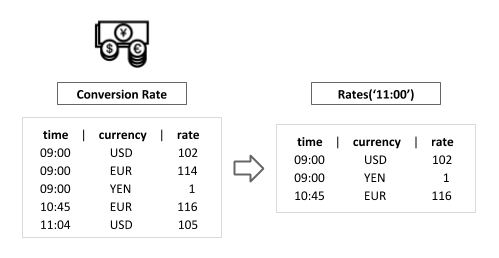 Each record from the append-only table on the probe side (Taxi Fare) is joined with the version of the record from the temporal table on the build side (Conversion Rate) that most closely matches the probe side record time attribute (time) for the same value of the primary key (currency). Remember the temporal table function (Rates) we registered earlier? It can now be used to express this join as a simple SQL statement that would otherwise require a heavier statement with a subquery.

Temporal table joins support both processing and event time semantics and effectively limit the amount of data kept in state while also allowing records on the build side to be arbitrarily old, as opposed to time-windowed joins. Probe-side records only need to be kept in state for a very short time to ensure correct semantics in presence of out-of-order records. The challenges mentioned in the beginning of this section are overcome by:

All this means it is now possible to express continuous stream enrichment in relational and time-varying terms using Flink without dabbling into syntactic patchwork or compromising performance. In other words: stream time-travelling minus the flux capacitor. Extending this syntax to batch processing for enriching historic data with proper (event) time semantics is also part of the Flink roadmap!

If you’d like to get some hands-on practice in joining streams with Flink SQL (and Flink SQL in general), checkout this free training for Flink SQL. The training environment is based on Docker and set up in just a few minutes.

Subscribe to the Apache Flink mailing lists to stay up-to-date with the latest developments in this space.