In this blog post, we’ll take a look at a class of use cases that is a natural fit for Flink Stateful Functions: monitoring and controlling networks of connected devices (often called the “Internet of Things” (IoT)).

IoT networks are composed of many individual, but interconnected components, which makes getting some kind of high-level insight into the status, problems, or optimization opportunities in these networks not trivial. Each individual device “sees” only its own state, which means that the status of groups of devices, or even the network as a whole, is often a complex aggregation of the individual devices’ state. Diagnosing, controlling, or optimizing these groups of devices thus requires distributed logic that analyzes the “bigger picture” and then acts upon it.

A powerful approach to implement this is using digital twins: each device has a corresponding virtual entity (i.e. the digital twin), which also captures their relationships and interactions. The digital twins track the status of their corresponding devices and send updates to other twins, representing groups (such as geographical regions) of devices. Those, in turn, handle the logic to obtain the network’s aggregated view, or this “bigger picture” we mentioned before.

Our Scenario: Datacenter Monitoring and Alerting

There are many examples of the digital twins approach in the real world, such as smart grids of batteries, smart cities, or monitoring infrastructure software clusters. In this blogpost, we’ll use the example of data center monitoring and alert correlation implemented with Stateful Functions.

Consider a very simplified view of a data center, consisting of many thousands of commodity servers arranged in server racks. Each server rack typically contains up to 40 servers, with a ToR (Top of the Rack) network switch connected to each server. The switches from all the racks connect through a larger switch (Fig. 1).

In this datacenter, many things can go wrong: a disk in a server can stop working, network cards can start dropping packets, or ToR switches might cease to function. The entire data center might also be affected by power supply degradation, causing servers to operate at reduced capacity. On-site engineers must be able to identify these incidents quickly and fix them promptly.

Diagnosing individual server failures is rather straightforward: take a recent history of metric reports from that particular server, analyse it and pinpoint the anomaly. On the other hand, other incidents only make sense “together”, because they share a common root cause. Diagnosing or predicting causes of networking degradation at a rack or datacenter level requires an aggregate view of metrics (such as package drop rates) from the individual machines and racks, and possibly some prediction model or diagnosis code that runs under certain conditions.

For the sake of this blog post, our oversimplified data center has some servers and racks, each with a unique ID. Each server has a metrics-collecting daemon that publishes metrics to a message queue, and there is a provisioning service that operators will use to ask for server commission- and decommissioning. 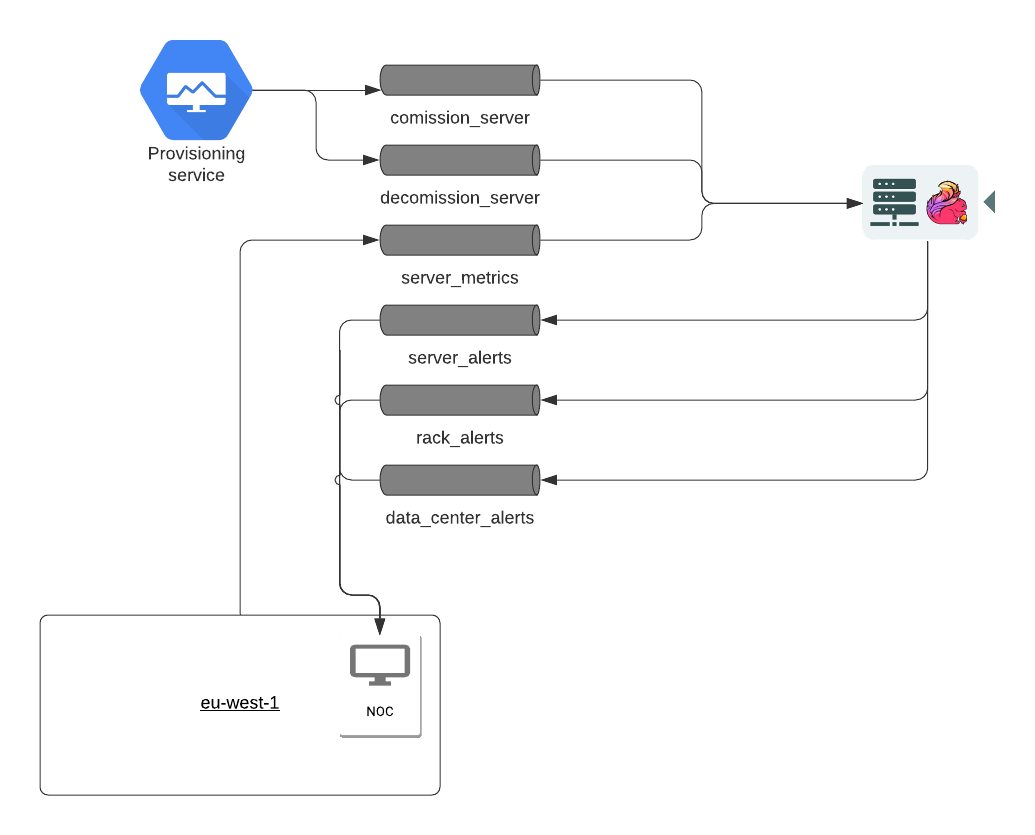 Our application will consume these server metrics and commission/decommission events, and produce server/rack/datacenter alerts. There will also be an operator consuming any alerts triggered by the monitoring system. In the next section, we’ll show how this use case can be naturally modeled with Stateful Functions (StateFun).

Implementing the use case with Flink StateFun

You can find the code for this example at: https://github.com/igalshilman/iot-statefun-blogpost

The basic building block for modeling a StateFun application is a stateful function, which has the following properties:

Each physical server is represented with its digital twin stateful function. This function is responsible for:

While the ServerFun is responsible for identifying server-local incidents, we need a function that correlates incidents happening on the different servers deployed in the same rack and:

This function maintains a view of incidents across different racks in our datacenter. 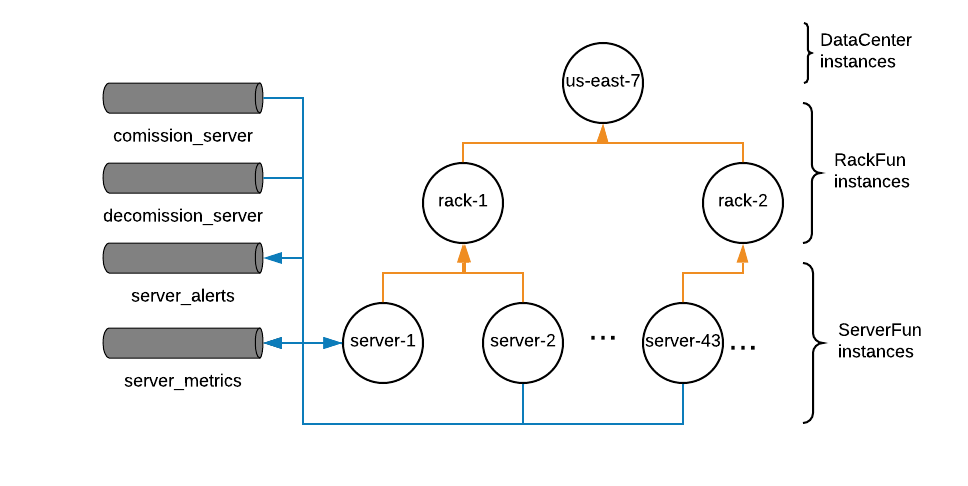 To summarize our plan:

How does it really look? 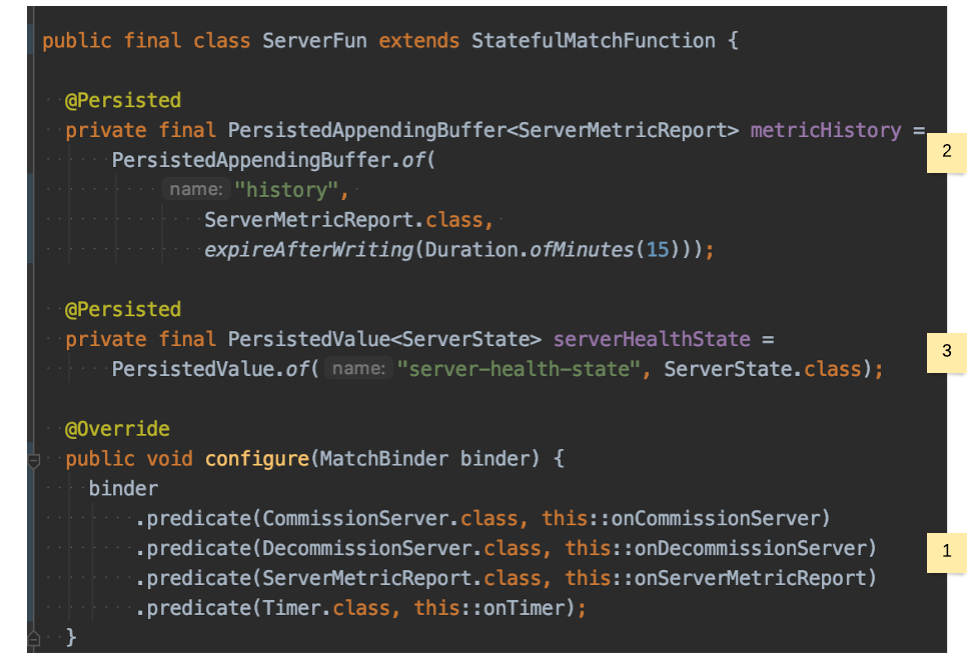 Let’s take a look at what happens when a ServerMetricReport message arrives: 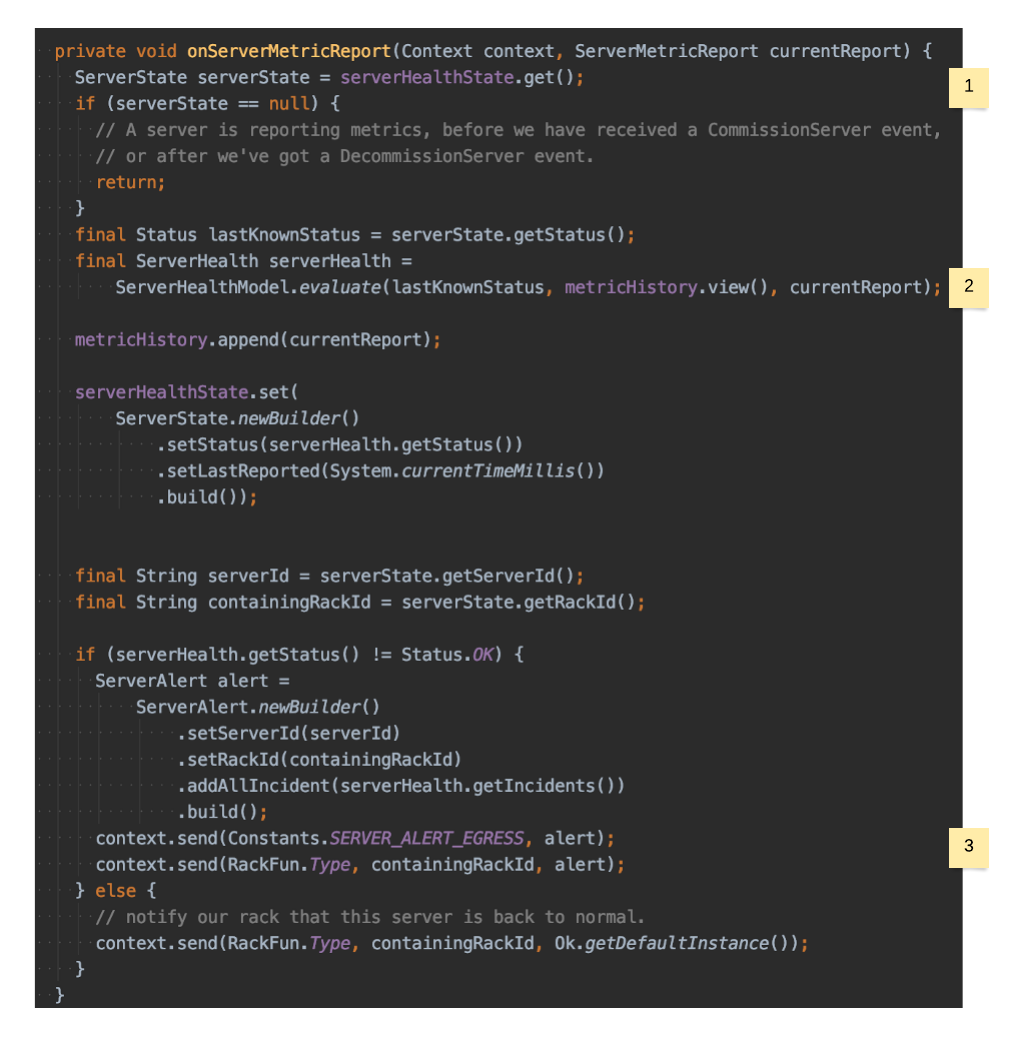 We’ll omit the other handlers for brevity, but it’s important to mention that onTimer makes sure that metric reports are coming in periodically, otherwise it’d trigger an alert stating that we didn’t hear from that server for a long time. 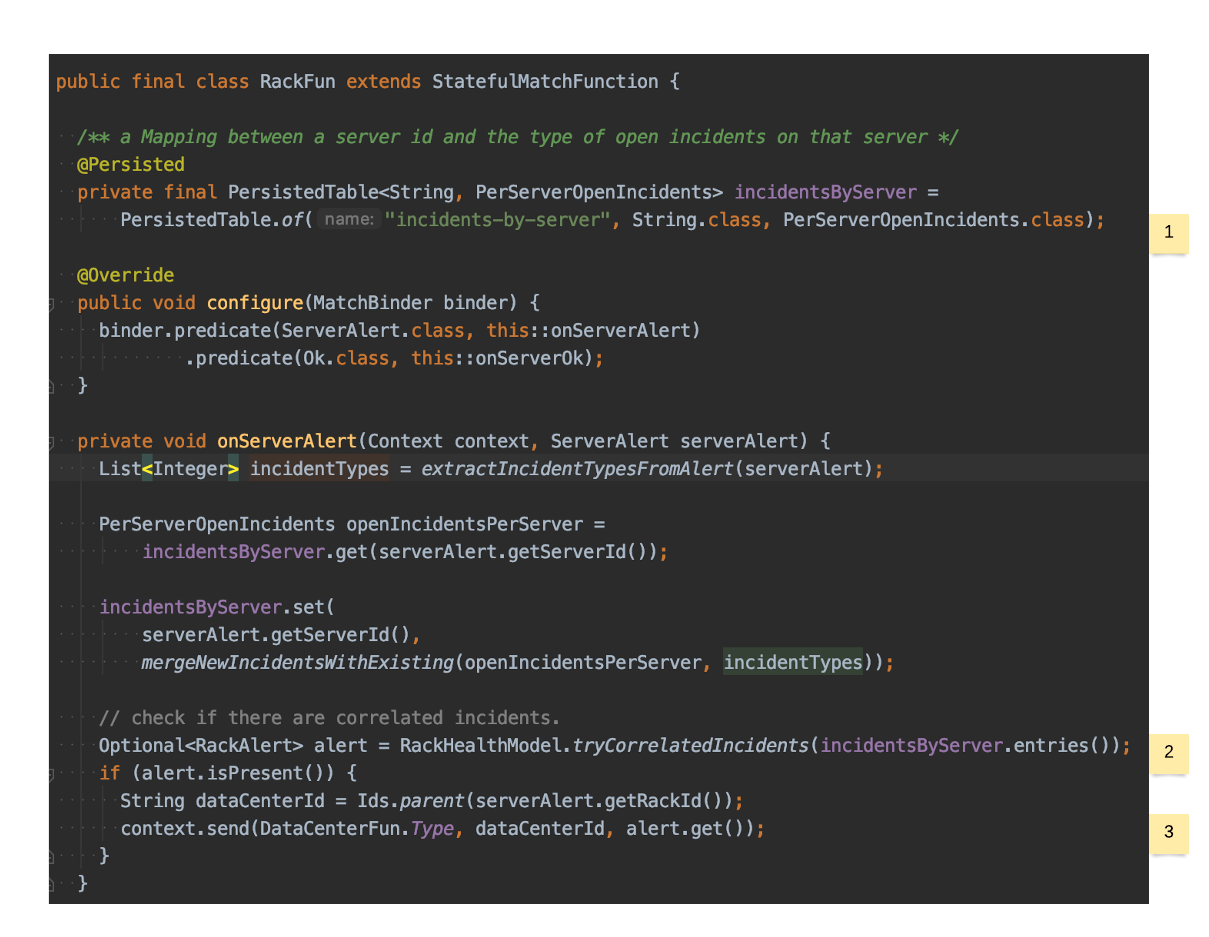 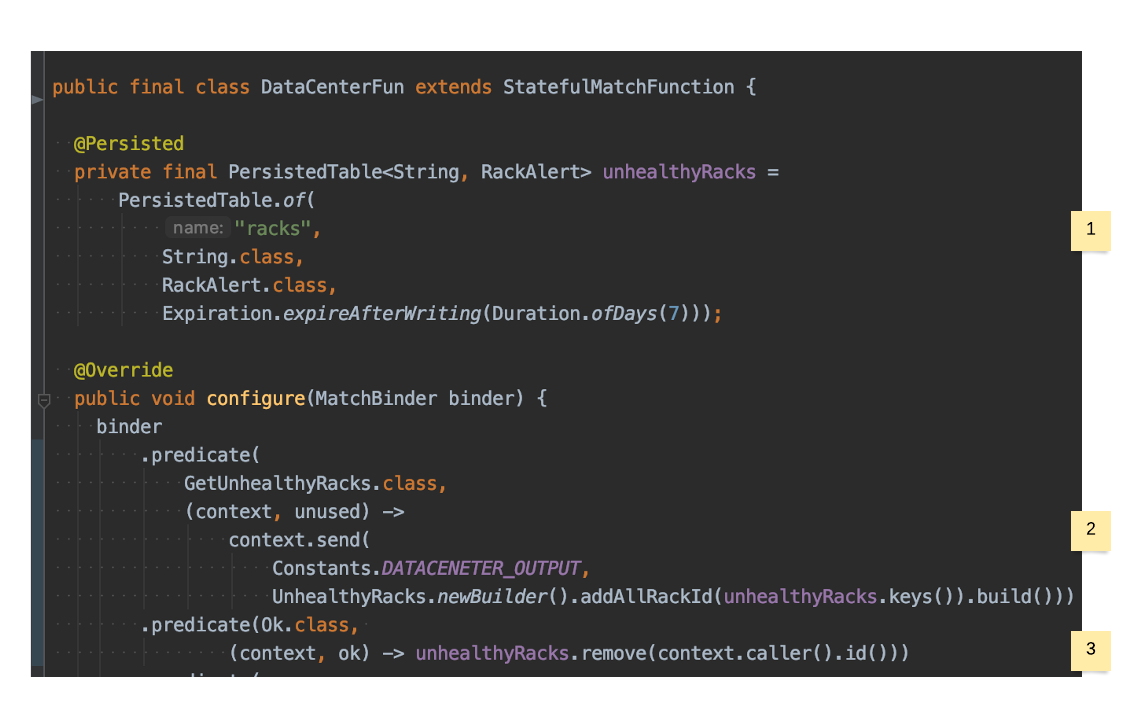 This pattern — where each layer of functions performs a stateful aggregation of events sent from the previous layer (or the input) — is useful for a whole class of problems. And, although we used connected devices to motivate this use case, it’s not limited to the IoT domain. 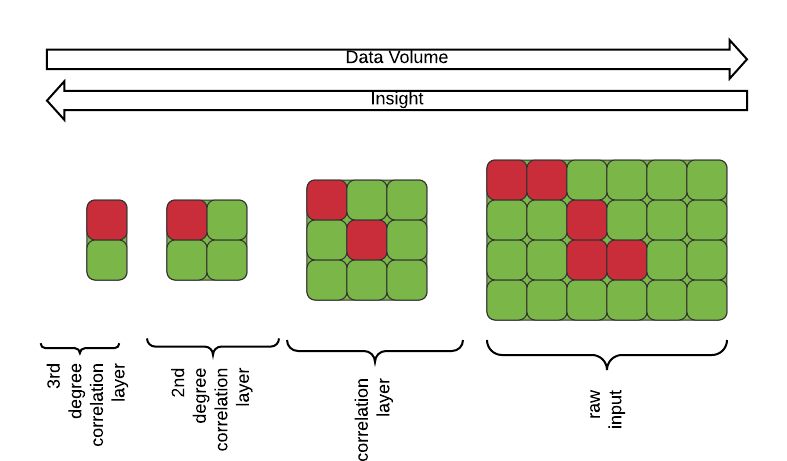 Stateful Functions provides the building blocks necessary for building complex distributed applications (here the digital twins that support analysis and interactions of the physical entities), while removing common complexities of distributed systems like service discovery, retires, circuit breakers, state management, scalability and similar challenges. If you’d like to learn more about Stateful Functions, head over to the official documentation, where you can also find more hands-on tutorials to try out yourself!