An Overview of End-to-End Exactly-Once Processing in Apache Flink (with Apache Kafka, too!)

Apache Flink 1.4.0, released in December 2017, introduced a significant milestone for stream processing with Flink: a new feature called TwoPhaseCommitSinkFunction (relevant Jira here) that extracts the common logic of the two-phase commit protocol and makes it possible to build end-to-end exactly-once applications with Flink and a selection of data sources and sinks, including Apache Kafka versions 0.11 and beyond. It provides a layer of abstraction and requires a user to implement only a handful of methods to achieve end-to-end exactly-once semantics.

If that’s all you need to hear, let us point you to the relevant place in the Flink documentation, where you can read about how to put TwoPhaseCommitSinkFunction to use.

But if you’d like to learn more, in this post, we’ll share an in-depth overview of the new feature and what is happening behind the scenes in Flink.

When we say “exactly-once semantics”, what we mean is that each incoming event affects the final results exactly once. Even in case of a machine or software failure, there’s no duplicate data and no data that goes unprocessed.

Flink has long provided exactly-once semantics within a Flink application. Over the past few years, we’ve written in depth about Flink’s checkpointing, which is at the core of Flink’s ability to provide exactly-once semantics. The Flink documentation also provides a thorough overview of the feature.

A checkpoint in Flink is a consistent snapshot of:

In the event of a machine or software failure and upon restart, a Flink application resumes processing from the most recent successfully-completed checkpoint; Flink restores application state and rolls back to the correct position in the input stream from a checkpoint before processing starts again. This means that Flink computes results as though the failure never occurred.

Before Flink 1.4.0, exactly-once semantics were limited to the scope of a Flink application only and did not extend to most of the external systems to which Flink sends data after processing.

But Flink applications operate in conjunction with a wide range of data sinks, and developers should be able to maintain exactly-once semantics beyond the context of one component.

To provide end-to-end exactly-once semantics–that is, semantics that also apply to the external systems that Flink writes to in addition to the state of the Flink application–these external systems must provide a means to commit or roll back writes that coordinate with Flink’s checkpoints.

We’ll walk through the two-phase commit protocol and how it enables end-to-end exactly-once semantics in a sample Flink application that reads from and writes to Kafka. Kafka is a popular messaging system to use along with Flink, and Kafka recently added support for transactions with its 0.11 release. This means that Flink now has the necessary mechanism to provide end-to-end exactly-once semantics in applications when receiving data from and writing data to Kafka. 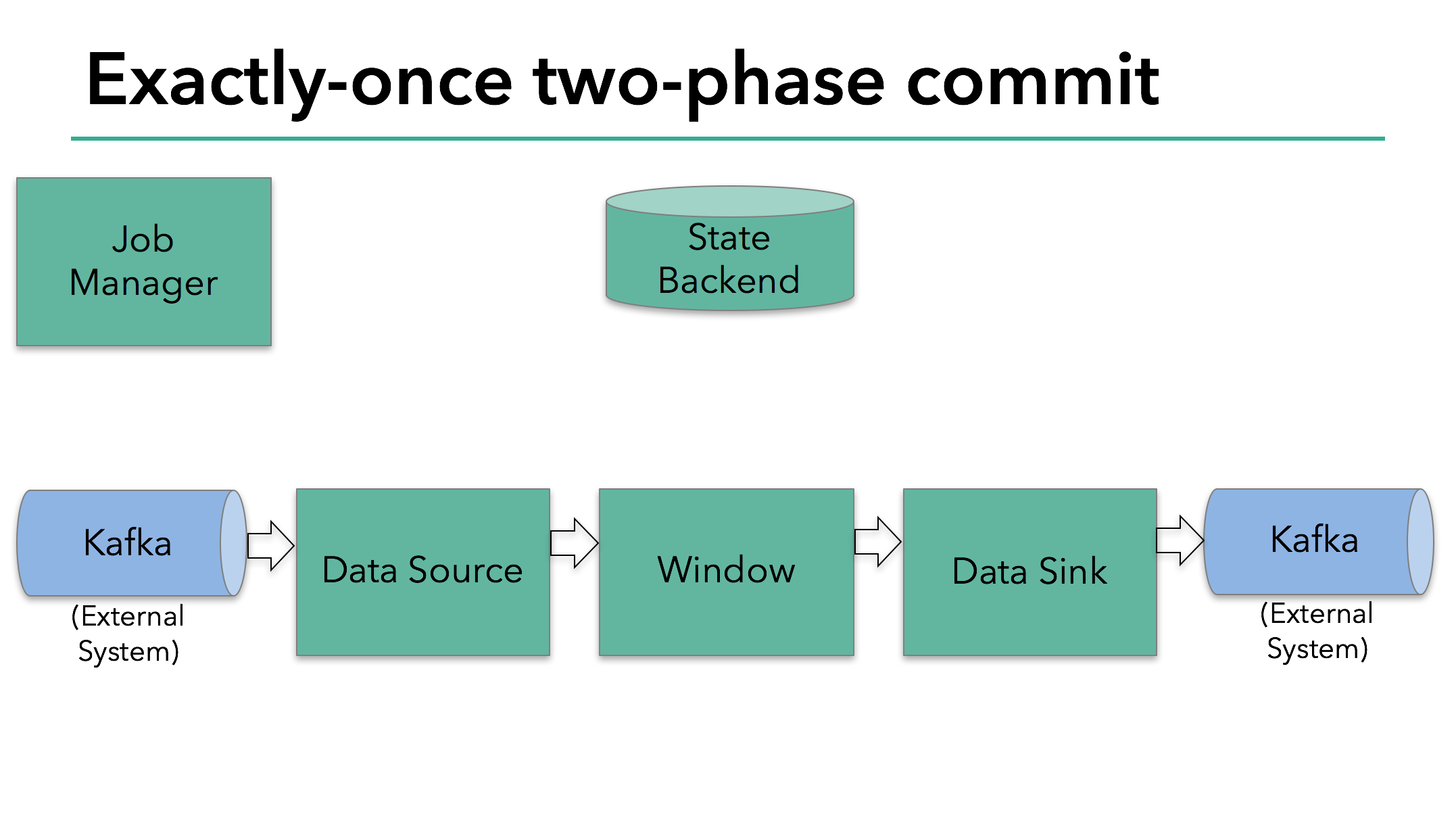 In the sample Flink application that we’ll discuss today, we have:

For the data sink to provide exactly-once guarantees, it must write all data to Kafka within the scope of a transaction. A commit bundles all writes between two checkpoints.

This ensures that writes are rolled back in case of a failure.

However, in a distributed system with multiple, concurrently-running sink tasks, a simple commit or rollback is not sufficient, because all of the components must “agree” together on committing or rolling back to ensure a consistent result. Flink uses the two-phase commit protocol and its pre-commit phase to address this challenge.

The barrier is passed from operator to operator. For every operator, it triggers the operator’s state backend to take a snapshot of its state. 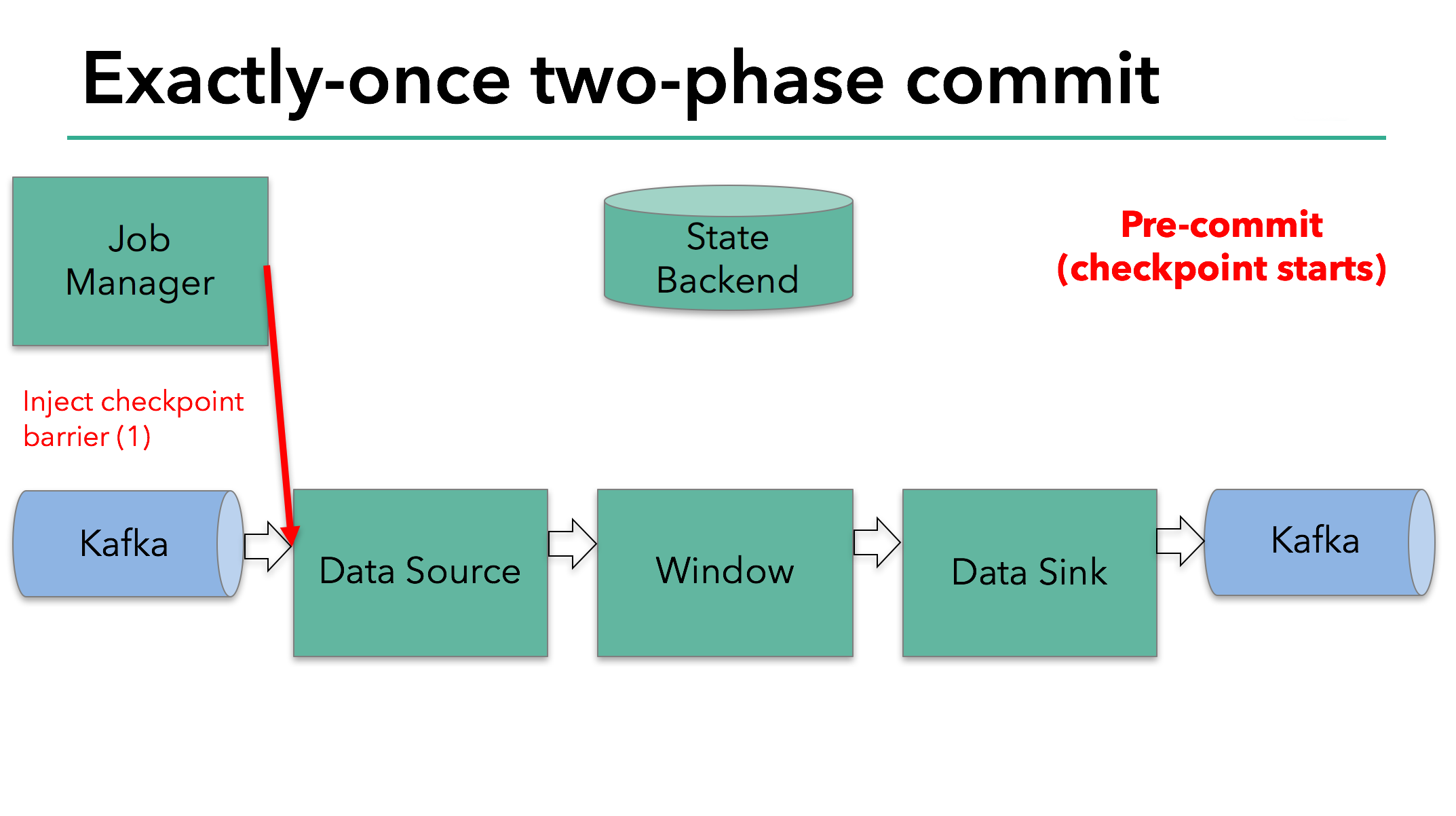 The data source stores its Kafka offsets, and after completing this, it passes the checkpoint barrier to the next operator.

This approach works if an operator has internal state only. Internal state is everything that is stored and managed by Flink’s state backends - for example, the windowed sums in the second operator. When a process has only internal state, there is no need to perform any additional action during pre-commit aside from updating the data in the state backends before it is checkpointed. Flink takes care of correctly committing those writes in case of checkpoint success or aborting them in case of failure. 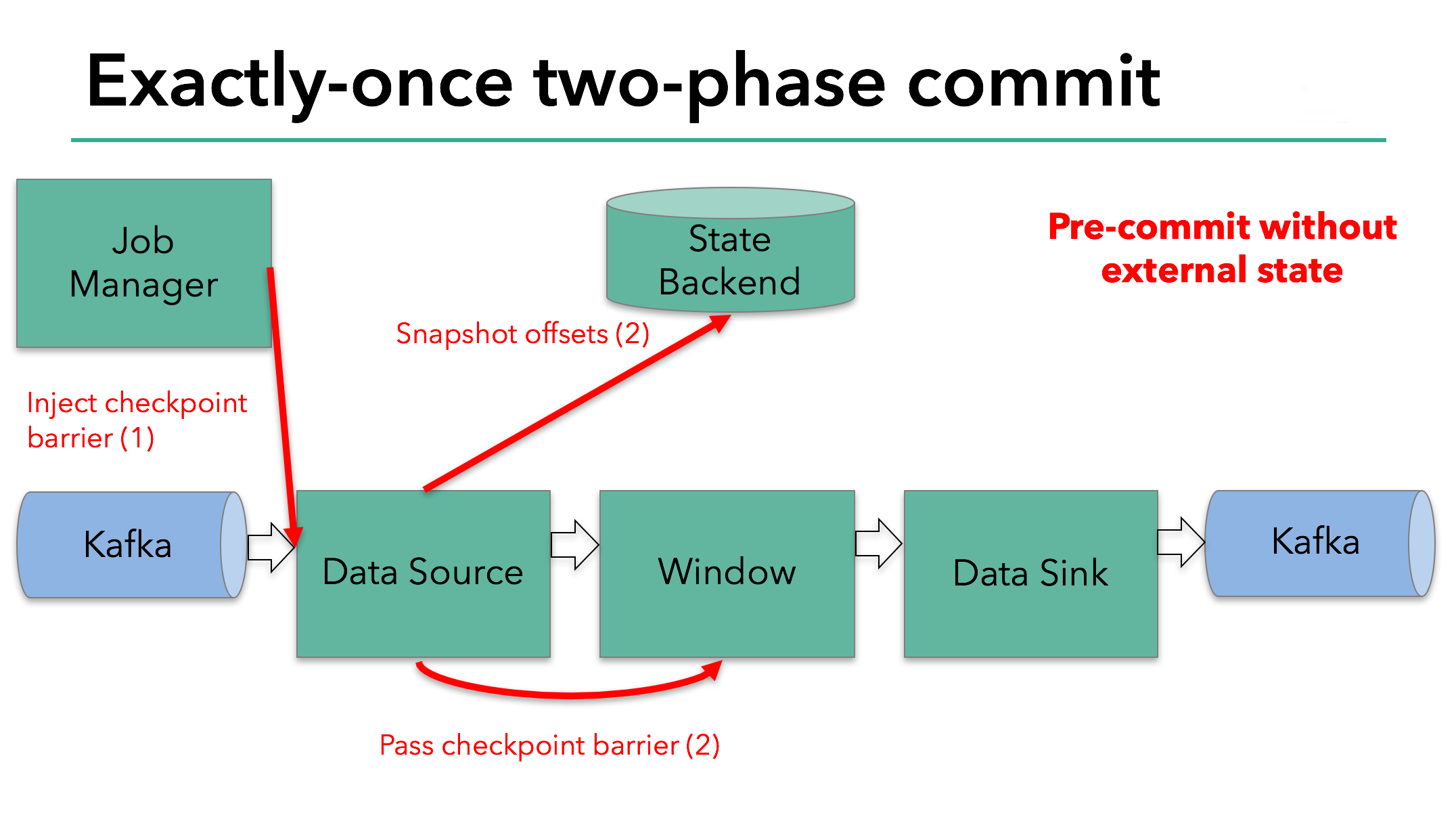 However, when a process has external state, this state must be handled a bit differently. External state usually comes in the form of writes to an external system such as Kafka. In that case, to provide exactly-once guarantees, the external system must provide support for transactions that integrates with a two-phase commit protocol.

We know that the data sink in our example has such external state because it’s writing data to Kafka. In this case, in the pre-commit phase, the data sink must pre-commit its external transaction in addition to writing its state to the state backend. 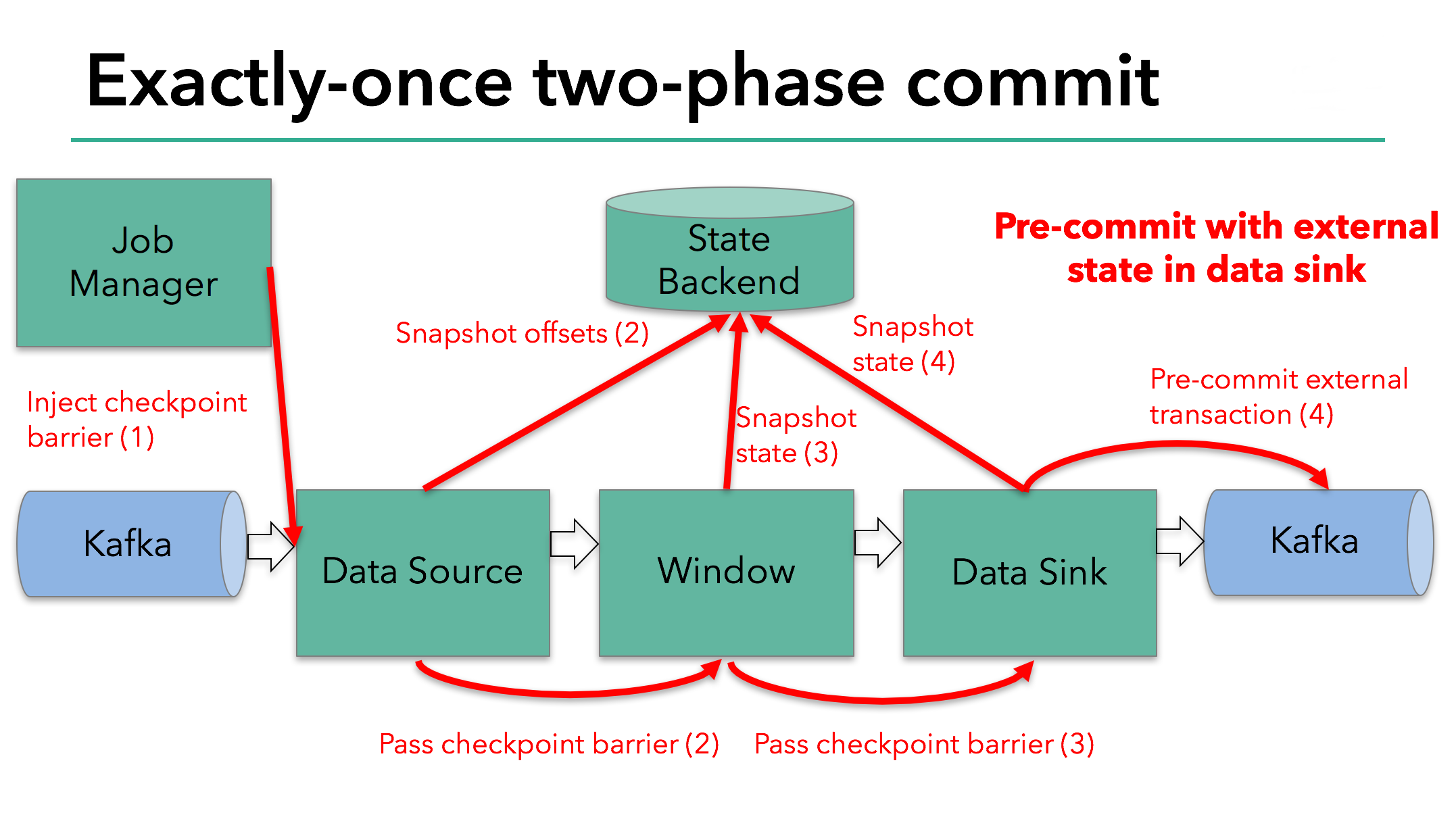 The pre-commit phase finishes when the checkpoint barrier passes through all of the operators and the triggered snapshot callbacks complete. At this point the checkpoint completed successfully and consists of the state of the entire application, including pre-committed external state. In case of a failure, we would re-initialize the application from this checkpoint.

The next step is to notify all operators that the checkpoint has succeeded. This is the commit phase of the two-phase commit protocol and the JobManager issues checkpoint-completed callbacks for every operator in the application. The data source and window operator have no external state, and so in the commit phase, these operators don’t have to take any action. The data sink does have external state, though, and commits the transaction with the external writes. 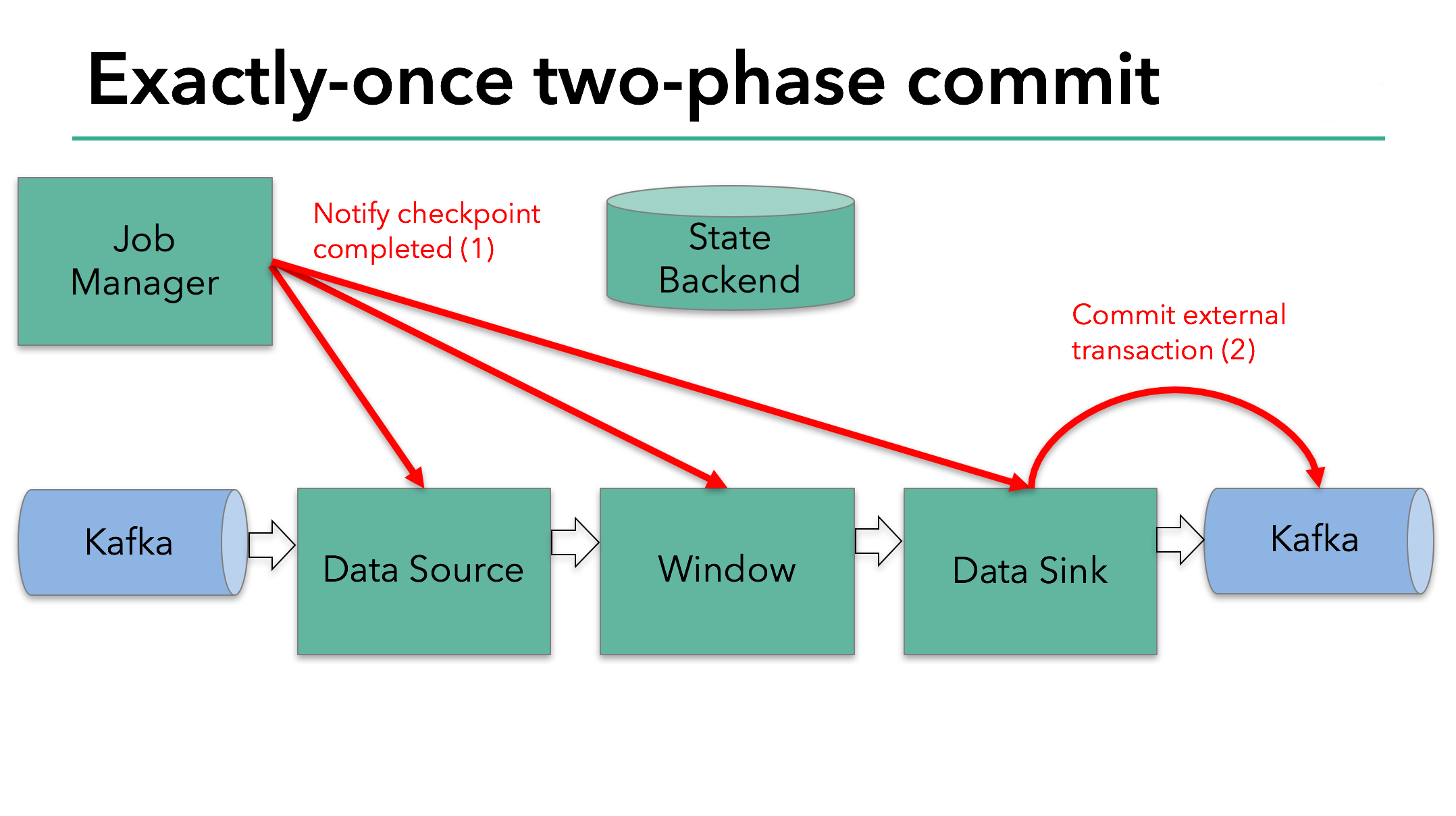 So let’s put all of these different pieces together:

Let’s discuss how to extend a TwoPhaseCommitSinkFunction on a simple file-based example. We need to implement only four methods and present their implementations for an exactly-once file sink:

As we know, if there’s any failure, Flink restores the state of the application to the latest successful checkpoint. One potential catch is in a rare case when the failure occurs after a successful pre-commit but before notification of that fact (a commit) reaches our operator. In that case, Flink restores our operator to the state that has already been pre-committed but not yet committed.

We must save enough information about pre-committed transactions in checkpointed state to be able to either abort or commit transactions after a restart. In our example, this would be the path to the temporary file and target directory.

The TwoPhaseCommitSinkFunction takes this scenario into account, and it always issues a preemptive commit when restoring state from a checkpoint. It is our responsibility to implement a commit in an idempotent way. Generally, this shouldn’t be an issue. In our example, we can recognize such a situation: the temporary file is not in the temporary directory, but has already been moved to the target directory.

There are a handful of other edge cases that TwoPhaseCommitSinkFunction takes into account, too. Learn more in the Flink documentation.

If you’ve made it this far, thanks for staying with us through a detailed post. Here are some key points that we covered:

We’re very excited about what this new feature enables, and we look forward to being able to support additional producers with the TwoPhaseCommitSinkFunction in the future.

This post first appeared on the data Artisans blog and was contributed to Apache Flink and the Flink blog by the original authors Piotr Nowojski and Mike Winters.