The Apache Flink project’s goal is to develop a stream processing system to unify and power many forms of real-time and offline data processing applications as well as event-driven applications. In this release, we have made a huge step forward in that effort, by integrating Flink’s stream and batch processing capabilities under a single, unified runtime.

Significant features on this path are batch-style recovery for batch jobs and a preview of the new Blink-based query engine for Table API and SQL queries. We are also excited to announce the availability of the State Processor API, which is one of the most frequently requested features and enables users to read and write savepoints with Flink DataSet jobs. Finally, Flink 1.9 includes a reworked WebUI and previews of Flink’s new Python Table API and its integration with the Apache Hive ecosystem.

This blog post describes all major new features and improvements, important changes to be aware of and what to expect moving forward. For more details, check the complete release changelog.

The binary distribution and source artifacts for this release are now available via the Downloads page of the Flink project, along with the updated documentation. Flink 1.9 is API-compatible with previous 1.x releases for APIs annotated with the @Public annotation.

Please feel encouraged to download the release and share your thoughts with the community through the Flink mailing lists or JIRA. As always, feedback is very much appreciated!

The time to recover a batch (DataSet, Table API and SQL) job from a task failure was significantly reduced. Until Flink 1.9, task failures in batch jobs were recovered by canceling all tasks and restarting the whole job, i.e, the job was started from scratch and all progress was voided. With this release, Flink can be configured to limit the recovery to only those tasks that are in the same failover region. A failover region is the set of tasks that are connected via pipelined data exchanges. Hence, the batch-shuffle connections of a job define the boundaries of its failover regions. More details are available in FLIP-1.

To use this new failover strategy, you need to do the following settings:

Note: The configuration of the 1.9 distribution has that entry by default, but when reusing a configuration file from previous setups, you have to add it manually.

Moreover, you need to set the ExecutionMode of batch jobs in the ExecutionConfig to BATCH to configure that data shuffles are not pipelined and jobs have more than one failover region.

The “Region” failover strategy also improves the recovery of “embarrassingly parallel” streaming jobs, i.e., jobs without any shuffle like keyBy() or rebalance. When such a job is recovered, only the tasks of the affected pipeline (failover region) are restarted. For all other streaming jobs, the recovery behavior is the same as in prior Flink versions.

Up to Flink 1.9, accessing the state of a job from the outside was limited to the (still) experimental Queryable State. This release introduces a new, powerful library to read, write and modify state snapshots using the batch DataSet API. In practice, this means:

Cancelling with a savepoint is a common operation for stopping/restarting, forking or updating Flink jobs. However, the existing implementation did not guarantee output persistence to external storage systems for exactly-once sinks. To improve the end-to-end semantics when stopping a job, Flink 1.9 introduces a new SUSPEND mode to stop a job with a savepoint that is consistent with the emitted data. You can suspend a job with Flink’s CLI client as follows:

The final job state is set to FINISHED on success, allowing users to detect failures of the requested operation.

More details are available in FLIP-34

After a discussion about modernizing the internals of Flink’s WebUI, this component was reconstructed using the latest stable version of Angular — basically, a bump from Angular 1.x to 7.x. The redesigned version is the default in 1.9.0, however there is a link to switch to the old WebUI.

Note: Moving forward, feature parity for the old version of the WebUI will not be guaranteed.

Following the donation of Blink to Apache Flink, the community worked on integrating Blink’s query optimizer and runtime for the Table API and SQL. As a first step, we refactored the monolithic flink-table module into smaller modules (FLIP-32). This resulted in a clear separation of and well-defined interfaces between the Java and Scala API modules and the optimizer and runtime modules. 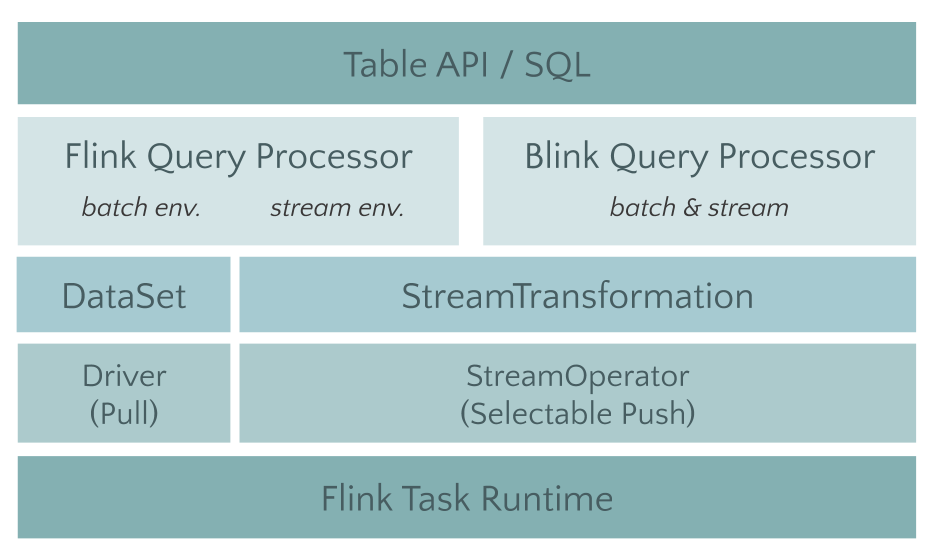 Note: The semantics and set of supported operations of the query processors are mostly, but not fully aligned.

However, the integration of Blink’s query processor is not fully completed yet. Therefore, the pre-1.9 Flink processor is still the default processor in Flink 1.9 and recommended for production settings. You can enable the Blink processor by configuring it via the EnvironmentSettings when creating a TableEnvironment. The selected processor must be on the classpath of the executing Java process. For cluster setups, both query processors are automatically loaded with the default configuration. When running a query from your IDE you need to explicitly add a planner dependency to your project.

Other Improvements to the Table API and SQL

Besides the exciting progress around the Blink planner, the community worked on a whole set of other improvements to these interfaces, including:

Apache Hive is widely used in Hadoop’s ecosystem to store and query large amounts of structured data. Besides being a query processor, Hive features a catalog called Metastore to manage and organize large datasets. A common integration point for query processors is to integrate with Hive’s Metastore in order to be able to tap into the data managed by Hive.

Recently, the community started implementing an external catalog for Flink’s Table API and SQL that connects to Hive’s Metastore. In Flink 1.9, users will be able to query and process all data that is stored in Hive. As described earlier, you will also be able to persist metadata of Flink tables in Metastore. Moreover, the Hive integration includes support to use Hive’s UDFs in Flink Table API or SQL queries. More details are available in FLINK-10556.

While, previously, table definitions for Table API or SQL queries were always volatile, the new catalog connector additionally allows persisting a table in Metastore that is created with a SQL DDL statement (see above). This means that you connect to Metastore and register a table that is, for example, backed by a Kafka topic. From now on, you can query that table whenever your catalog is connected to Metastore.

Please note that the Hive support in Flink 1.9 is experimental. We are planning to stabilize these features for the next release and are looking forward to your feedback.

This release also introduces a first version of a Python Table API (FLIP-38). This marks the start towards our goal of bringing full-fledged Python support to Flink. The feature was designed as a slim Python API wrapper around the Table API, basically translating Python Table API method calls into Java Table API calls. In the initial version that ships with Flink 1.9, the Python Table API does not support UDFs yet, but just standard relational operations. Support for UDFs implemented in Python is on the roadmap for future releases.

If you’d like to try the new Python API, you have to manually install PyFlink. From there, you can have a look at this walkthrough or explore it on your own. The community is currently working on preparing a pyflink Python package that will be made available for installation via pip.

Please review the release notes for a more detailed list of changes and new features if you plan to upgrade your Flink setup to Flink 1.9.0.

We would like to thank all contributors who have made this release possible: