Announcing the Release of Apache Flink 1.16

Apache Flink continues to grow at a rapid pace and is one of the most active communities in Apache. Flink 1.16 had over 240 contributors enthusiastically participating, with 19 FLIPs and 1100+ issues completed, bringing a lot of exciting features to the community.

Flink has become the leading role and factual standard of stream processing, and the concept of the unification of stream and batch data processing is gradually gaining recognition and is being successfully implemented in more and more companies. Previously, the integrated stream and batch concept placed more emphasis on a unified API and a unified computing framework. This year, based on this, Flink proposed the next development direction of Flink-Streaming Warehouse (Streamhouse), which further upgraded the scope of stream-batch integration: it truly completes not only the unified computation but also unified storage, thus realizing unified real-time analysis.

In 1.16, the Flink community has completed many improvements for both batch and stream processing:

With the further refinement of the integration of stream and batch, and the continuous iteration of the Flink Table Store (0.2 has been released), the Flink community is pushing the Streaming warehouse from concept to reality and maturity step by step.

To be precise, a streaming warehouse is to make data warehouse streaming, which allows the data for each layer in the whole warehouse to flow in real-time. The goal is to realize a Streaming Service with end-to-end real-time performance through a unified API and computing framework. Please refer to the article for more details.

The feedback from various channels indicates that SQL Gateway is a highly anticipated feature for users, especially for batch users. This function finally completed (see FLIP-91 for design) in 1.16. SQL Gateway is an extension and enhancement to SQL Client, supporting multi-tenancy and pluggable API protocols (Endpoints), solving the problem that SQL Client can only serve a single user and cannot be integrated with external services or components. Currently SQL Gateway has support for REST API and HiveServer2 Protocol and users can link to SQL Gateway via cURL, Postman, HTTP clients in various programming languages to submit stream jobs, batch jobs and even OLAP jobs. For HiveServer2 Endpoint, please refer to the Hive Compatibility for more details.

To reduce the cost of migrating Hive to Flink, we introduce HiveServer2 Endpoint and Hive Syntax Improvements in this version:

The HiveServer2 Endpoint allows users to interact with SQL Gateway with Hive JDBC/Beeline and migrate with Flink into the Hive ecosystem (DBeaver, Apache Superset, Apache DolphinScheduler, and Apache Zeppelin). When users connect to the HiveServer2 endpoint, the SQL Gateway registers the Hive Catalog, switches to Hive Dialect, and uses batch execution mode to execute jobs. With these steps, users can have the same experience as HiveServer2.

For batch jobs, the hash join operators may fail if the input data is severely skewed, it’s a very bad experience for users. To solve this, we introduce adaptive Hash-Join which can automatically fall back to Sort-Merge-Join once the Hash-Join fails in runtime. This mechanism ensures that the Hash-Join is always successful and improves the stability by gracefully degrading from a Hash-Join to a more robust Sort-Merge-Join.

Speculative execution is introduced in Flink 1.16 to mitigate batch job slowness which is caused by problematic nodes. A problematic node may have hardware problems, accident I/O busy, or high CPU load. These problems may make the hosted tasks run much slower than tasks on other nodes, and affect the overall execution time of a batch job.

When speculative execution is enabled, Flink will keep detecting slow tasks. Once slow tasks are detected, the nodes that the slow tasks locate in will be identified as problematic nodes and get blocked via the blocklist mechanism (FLIP-224). The scheduler will create new attempts for the slow tasks and deploy them to nodes that are not blocked, while the existing attempts will keep running. The new attempts process the same input data and produce the same data as the original attempt. Once any attempt finishes first, it will be admitted as the only finished attempt of the task, and the remaining attempts of the task will be canceled.

We have introduced a new Hybrid Shuffle Mode for batch executions. It combines the advantages of blocking shuffle and pipelined shuffle (in streaming mode).

Note: This feature is experimental and by default not activated.

We further improved the blocking shuffle usability and performance in this version, including adaptive network buffer allocation, sequential IO optimization and result partition reuse which allows multiple consumer vertices reusing the same physical result partition to reduce disk IO and storage space. These optimizations can achieve an overall 7% performance gain for the TPC-DS test with a scale of 10 TB. In addition, two more compression algorithms (LZO and ZSTD) with higher compression ratio were introduced which can further reduce the storage space with some CPU cost compared to the default LZ4 compression algorithm.

In 1.16, we have made improvements in Checkpoints, SQL, Connector and other fields, so that stream computing can continue to lead.

Rescaling is a frequent operation for cloud services built on Apache Flink, this release leverages deleteRange to optimize the rescaling of Incremental RocksDB state backend. deleteRange is used to avoid massive scan-and-delete operations, for upscaling with a large number of states that need to be deleted, the speed of restoring can be almost increased by 2~10 times. 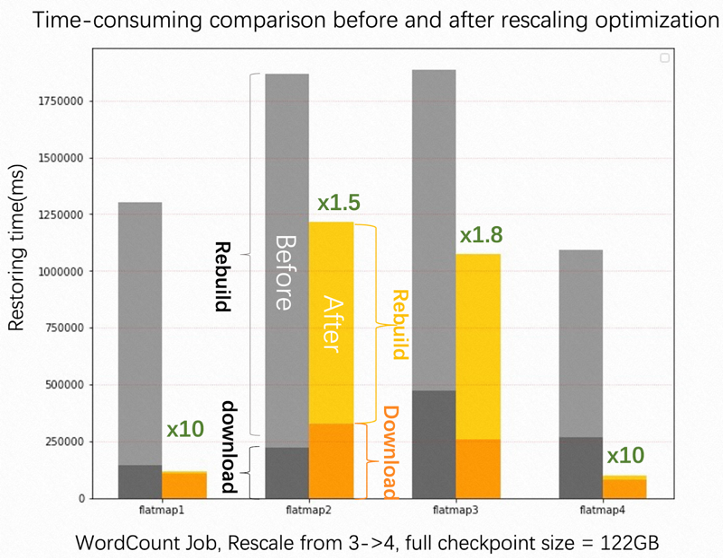 This release also improves the monitoring experience and usability of state backend. Previously, RocksDB’s log was located in its own DB folder, which made debugging RocksDB not so easy. This release lets RocksDB’s log stay in Flink’s log directory by default. RocksDB statistics-based metrics are introduced to help debug the performance at the database level, e.g. total block cache hit/miss count within the DB.

A new concept of overdraft network buffer is introduced to mitigate the effects of uninterruptible blocking a subtask thread during back pressure, which can be turned on through the taskmanager.network.memory.max-overdraft-buffers-per-gate configuration parameter.
Starting from 1.16.0, Flink subtask can request by default up to 5 extra (overdraft) buffers over the regular configured amount. This change can slightly increase memory consumption of the Flink Job but vastly reduce the checkpoint duration of the unaligned checkpoint. If the subtask is back pressured by downstream subtasks and the subtask requires more than a single network buffer to finish what it’s currently doing, overdraft buffer comes into play. Read more about this in the documentation.

Previously, the switch of one subtask needs to wait for all barriers from upstream. If the back pressure is severe, the downstream subtask may not receive all barriers within checkpointing-timeout, causing the checkpoint to fail.

In this release, if the barrier cannot be sent from the output buffer to the downstream task within the execution.checkpointing.aligned-checkpoint-timeout, Flink lets upstream subtasks switch to UC first to send barriers to downstream, thereby decreasing the probability of checkpoint timeout during back pressure. More details can be found in this documentation.

For complex streaming jobs, now it’s possible to detect and resolve potential correctness issues before running. If the problems can’t be resolved completely, a detailed message could prompt users to adjust the SQL so as to avoid introducing non-deterministic problems. More details can be found in the documentation.

Lookup join is widely used in stream processing, and we have introduced several improvements:

Introduces a built-in retry mechanism for asynchronous I/O that is transparent to the user’s existing code, allowing flexibility to meet the user’s retry and exception handling needs.

In Flink 1.15, we have introduced a new execution mode ‘thread’ mode in which the user-defined Python functions will be executed in the JVM via JNI instead of in a separate Python process. However, it’s only supported for Python scalar functions in the Table API & SQL in Flink 1.15. In this release, we have provided more comprehensive support for it. It has also been supported in the Python DataStream API and also Python table functions in the Table API & SQL.

We are also continuing to fill in the last few missing features in Python API. In this release, we have provided more comprehensive support for Python DataStream API and supported features such as side output, broadcast state, etc and have also finalized the windowing support. We have also added support for more connectors and formats in the Python DataStream API, e.g. added support for connectors elasticsearch, kinesis, pulsar, hybrid source, etc and formats orc, parquet, etc. With all these features added, the Python API should have aligned most notable features in the Java & Scala API and users should be able to develop most kinds of Flink jobs using Python language smoothly.

In 1.16, we extend more DDL syntaxes which could help users to better use SQL:

Cache in DataStream for Interactive Programming

Supports caching the result of a transformation via DataStream#cache. The cached intermediate result is generated lazily at the first time the intermediate result is computed so that the result can be reused by later jobs. If the cache is lost, it will be recomputed using the original transformations. Currently only batch mode is supported. This feature is very useful for ML and interactive programming in Python.

We have enhanced the experiences of viewing completed jobs’ information in this release.

Flink now supports the Protocol Buffers (Protobuf) format. This allows you to use this format directly in your Table API or SQL applications.

The Async Sink was implemented in 1.15 to allow users to easily implement their own custom asynchronous sinks. We have now extended it to support a configurable RateLimitingStrategy. This means sink implementers can now customize how their Async Sink behaves when requests fail, depending on the specific sink. If no RateLimitingStrategy is specified, it will default to the current default of AIMDScalingStrategy.

We aim to make upgrades as smooth as possible, but some of the changes require users to adjust some parts of the program when upgrading to Apache Flink 1.16. Please take a look at the release notes for a list of adjustments to make and issues to check during upgrades.

The Apache Flink community would like to thank each one of the contributors that have made this release possible: